I love that Dave puts together the Snowbuster Pikermi every year.  I always enter, but I don’t think I’ve ever actually run a hard 13.1 miles for it.  I typically take the longest or best run that I have within that date range and enter it.  This year the weekend fell 3 weeks before my next marathon, so I had my longest long run of this cycle planned – a 23 miler!

After a really rough patch in January, I took 8 days off running and decided I wasn’t going to run my March marathon after all.  It’s an inaugural race near where my parents live (where I grew up).  All along I was planning to run it completely for fun (without a time goal) prior to getting serious about a PR attempt at Grandma’s Marathon in June.  At the end of January, I was feeling terrible and getting slower by the day, so I figured there was no point in running my for fun race when running wasn’t fun!

However, I guess those 8 days off plus another week easy was exactly what I needed.  Once I started running again (sans training schedule) I felt the best I have in months and was improving.  I was running quite a bit of mileage simply because I felt like it.  On February 23 I decided that if I could run 18 miles that day, then follow it with a 20 miler on March 2 and a 23 miler on March 9, I could do a 2 week taper and run my planned marathon after all – and I passionately wanted to!  February 23 didn’t exactly go as planned; I ran 20 instead of 18 and felt amazing doing it (I'd run an 18 in January so this wasn't completely unreasonable).  That meant I could do my 23 miler on March 2 and still have a 3 week taper in my long run distance, which is my preference, so I decided to run 23 miles on snowbuster day.  This also allows me to do a long run with a workout on March 9, but that's another post...

I have several training buddies who are also marathon training, and two of them wanted to get in 21-23 miles that day as well, so it worked very nicely.  The weather was great; 32 degrees with a windchill of 26 degrees.  Since my training cycle has been rocky to say the least, I simply wanted 23 steady miles with nothing fast or fancy (i.e., no workout).  I really wanted to finish strong because I really needed that confidence boost to tackle a marathon on fewer long long runs that I typically do. If I bombed this one I couldn't exactly say, "It's okay, my other 23 miler went great!"  I told my friends that I didn’t want to run anything under 7:30 pace during the first half of the run, and that if I felt good I’d be open to dropping the pace later, but I left my watch under my sleeve for the entire run so really didn’t know what we were doing.  I am a big proponent of running by feel, and sometimes ignorance of pace can be bliss!

I started the run with Claudio, Rebecca, and Jack.  Jack is a high school junior who has been running with our group to prepare for track season, and his long run was 8 miles, so we began with an 8 mile loop and dropped him off.  I’d set a small bottle with a gel taped to it on the back of my car and picked it up on the run. I like to practice marathon aid stations like this during long runs; I never stop my watch to drink or fuel because race clocks don’t stop. We then tackled a 13 mile loop because Claudio was aiming for 21-22 miles.  The miles flew by and I felt strong.  The pace never felt hot and we talked the whole time.  Rebecca had a bit of a rough day and dropped back from us around mile 14.  I've run enough long runs that I can typically tell how things will hold up, and I felt like I was going to finish the 23 strong.

At 18 I knew for sure that 23 was going to be no problem at all.  I didn’t really realize we were speeding up, but my splits tell me that we did.  We made it back to our cars at 21 miles, and Claudio said he’d do 22.  I felt fine with finishing up a mile on my own after he stopped, but then he said he’d go to 23 with me, which was even better!

After we finished, he made a comment about our sub-7:00 miles, and I said, “I don't think I ran any miles under 7:00” and he said, Yeah, yes you did”, which I discovered was true when I uploaded my run.  My last 5 miles were all 6:50-7:05, and my average pace for the entire run was the fastest I’d run a relaxed long run this season.  Before my injury in September 2018, I was running my entire long runs at 6:50-7:05 pace, and while my fitness is not back to that level yet, this was a small glimpse that it’s coming back. 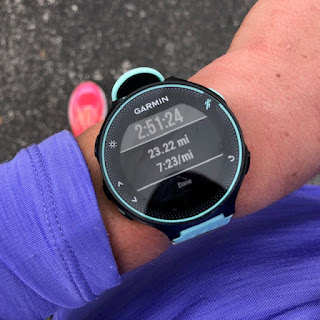 I also set a PR on my rolling 7 days mileage this day!  I was pumped about this volume, but will admit that it was easier than most weeks I've done in the 80s with workouts (I did only one baby workout, a 3 mile tempo run within a 10 miler, plus a couple set of strides - the rest was easy running). 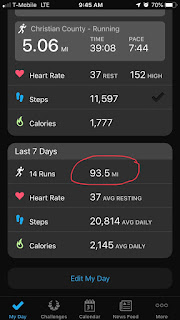 Our forecast called for 5-8 inches of snow overnight on March 2 into the morning of March 3.  I woke up on March 3 to about an inch of snow, and finished off my weekly mileage while it was still coming down.  We ended up getting very little more, so I'm going to say my snowbuster run worked to bust the almost all of our snow.

I hope the Snowbuster Race Series continues every winter!  Now come on, spring!