I wrote this at the end of last week, but I figured why not try to recruit some Loopsters to join me for some races.

Happy Friday (Saturday now, but still happy), friends! It’s been a long week, but it’s SO CLOSE to being time to move into the good part. My week has been action packed in every way. Work has been busy (not such a bad thing) with lots of excitement going on. Jen and I are plotting our family vacation this year and are working between Myrtle Beach or DisneyWorld. It ain’t cheap haha.

I’ve managed to run 4 days so far this week and plan on running a semi-long one tomorrow. The early wake ups are starting to wear me down a little and I need to focus on getting my butt in bed earlier if I’m going to keep doing it. I’m still running what I want, when I want, how I want for the most part and I don’t have a training plan. However, I DID sign up for some stuff! April is going to be a busy month.

This will be my first relay ever! The race starts in Asheville, NC and ends up in Greenville, SC for a total of 75 miles. As the name implies, THERE WILL BE CRAFT BREW. I should end up running one or two legs of the race, which means no more than 20 miles or so total. Our team isn’t really all that competitive, so I can run at a semi-leisurely pace and I don’t require a ton of intense training. I like that.

Just tell me how far to the next brewery.

2 weeks later, it’ll be a trip to Louisville, KY for the mini marathon down in Louisville, KY. I have several reasons to be excited about this! 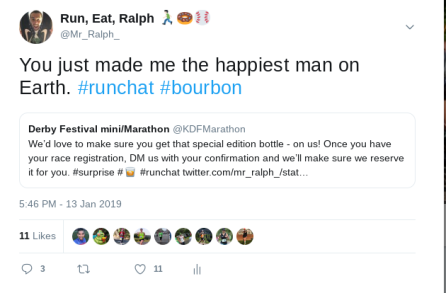 I’m on the fence about whether I’m going to really “race” this one and try to PR or just enjoy it. We shall see…