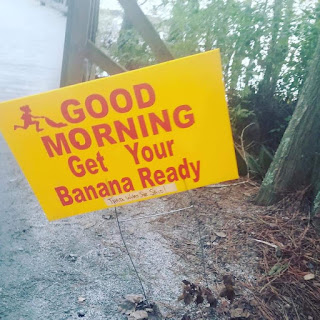 In 2016, the Hinson Lake 24 Hour Ultra Classic was the race that earned me my first buckle. I completed 109 miles that weekend and knew that I would return after recovering from experiencing some of the highest highs and lowest lows. 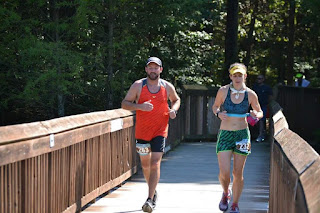 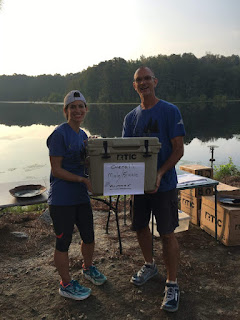 In 2017, I trained hard. Really, really hard. I ran half marathons on weekdays and spent 6-7 hours running each weekend. I had big goals going into the race and ended up with nearly 116 miles, a new 100 mile PR, and a course record. 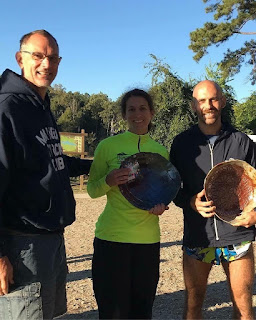 At the stroke of midnight on New Year's Eve, I signed up for my 3rd Hinson Lake 24 Hour Ultra Classic. I had just come off a new 6 hour PR and had some successful marathons despite doing zero road marathon training. I felt strong and good and happy. 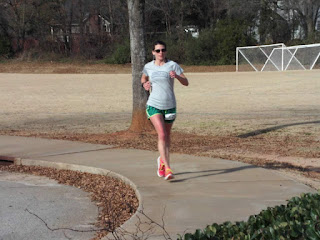 Fast forward through 9 months that consisted of 2 stress fractures and all the recovery processes that came with them. I had a reasonably successful half-marathon (+warm up and cool down =16 total miles) the weekend prior at Augusta and with the notion of getting in a long run before NYC, I had a plan. I would run 20ish on Saturday morning at HL24, 5ish on Saturday evening and 6ish on Sunday morning. This would give me a nice 50K and not tax my body too much.

It was incredibly humid the day before the race and it did not appear to be getting any better according to weather predictions. I crawled into my tent that night, almost sweating on top of my sleeping bag. Luckily, my superpower is sleeping anywhere, anytime and I found I had dozed off easily when someone latecomers woke me up dragging their cooler through the sand just outside my tent at 11 p.m.

I didn't even set my watch alarm because I knew the hubbub of the morning would wake me up. People started stirring around 5-something and I eventually made the trek to the lodge to pee. There was still plenty of time and I lounged around, eating my overnight oats and eventually getting all my gear laid out like I wouldn't have any time to stop. It was hard to disassociate myself from the fact that I would have plenty of time to comb through my snacks.

I pinned on my bib and headed over to the start. I watched Ray receive his 1,000 mile jacket and put my hand over my heart for the national anthem. And then we were off!

The first few laps, I ran in stride with Matt, keeping the pace around 11 minute miles and conversation light. We parted ways around the 4th loop and I continued on while he conserved himself for a long day and night. I was enjoying the easy effort after the half marathon pace from the prior weekend. Thought it wasn't ideal to be going as slow for NYC, it really was better for my psyche to have the time on my feet and the easier effort.

Round and round I went on the 1.5 mile loop. I grabbed peanut butter pretzels, mixed sweet tea with water, and didn't worry about the pace on my watch. With the 1.5 mile loop, I either had to run 19.5 miles or 21 so clearly I opted for 21. When I got through that lap, I had been toying with the idea of doing a marathon and then stopping for a bit. So I keep running through 22.5 and in the middle of that lap, I came somewhat to my senses and told myself to stop no matter what at that lap.

It was really, really hard to make myself go sit down.

Which sounds insane if you aren't a runner. Most people would probably be relieved to go sit at nearly 23 miles. But I was frustrated for a bit that I wasn't healthy enough to continue running without screwing up my progress. 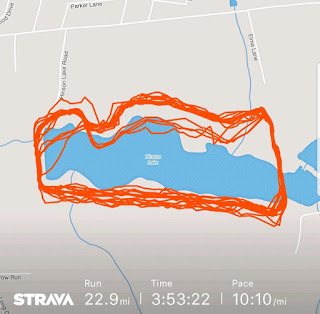 About 30 minutes went by before Rachelle came to sit and asked if I had any of the pizza yet. My A goal was to eat the pizza hot!

The start/finish line was about a quarter mile in the wrong direction from our camp so anytime I wanted to eat or drink, I opted to just take a 1.5 mile lap instead of backtracking. So I got up and walked a lap so I could grab some hot pizza.

And then I sat again.

I grew restless and decided to go on a slushie run to Sonic. Jen had mentioned it the day before and I thought it would be A) a forced way for me to not be racing B) a nice treat for Jen and C) a nice treat for other people. I managed to get there during happy hour and sat in line for 20 minutes in the drive-thru. Yes, it was super weird to leave a race in the middle of the race, drive to a fast food place, and come back.

I doled out the slushies and had a few extras that I hawked like scalped tickets on the corner of the trail. It took less than a minute to find takers for the extras. One guy thanked me at least 3 times throughout the rest of the race!

Jay came and got his gear from me and then I walked another lap at one point with Jen and then did a few running laps with Matt. I turned on my GPS for a bit on the running laps, but then just decided to keep it off for the rest of the race.

Everything else I did after those last 4.5 miles of running were strictly walking. I walked when they had hamburgers and chicken tenders at dinner and marveled how I never even realized they had those before. Maybe they didn't? All I know is that I definitely wouldn't have been eating them 8-9 hours into the race if I was chasing big miles!

I walked when Jen needed company. I walked a bit with Win and Paul. I walked after sitting in my camp chair for extended sessions.I ran into old Hinson friends (hey Tim!) and made new ones. And I actually felt really, really good!

After the sun set, I did a few more walking laps and then decided to try to get some rest so that I could be alert for Matt and Jen if they wanted company in the evil 2am- 5am time. With all the walking laps after I ran 22.5 + 4.5 or so earlier in the day, I was at 43 miles by about 10:30pm. I got into my tent and passed out almost immediately, but had the wherewithal to set my alarm for 2am.

When my watch alarm went off at 2am, I reset it for 2:15am and laid in my tent for a few more minutes. At 2:15am, I stumbled out of my tent and got ready in case if anyone wanted company. I refreshed the tracker and saw Matt had not crossed the mat in awhile and I immediately went to his tent and starting shaking it. Discovering he was not inside, I stood and waited. He arrived shortly thereafter looking pretty rough. Everything was hurting and despite my cajoling him with calories, hydration, Biofreeze, and the promise he could do it just by putting one foot in front of the other, he was not interested in making another step at the moment.

I actually felt annoyingly refreshed from my 3 hour nap and decided to walk a lap. And then a couple more. And then I sat for awhile and walked a few more laps. Laurie was at the aid station at this point and I was actually kind of hungry so it was fun to just go 'round and 'round, walking and getting snacks with each loop.

One of the many silly things that this race does is have a bunch of garden gnomes all over the course. Runners move them to different spots the entire 24 hours. There was once with a snorkel that ended up in multiple puddles. They stick them on the trail, on the sewer drain tops, next to trees, etc. I had never moved one in my prior two races, so it seemed like a good year to walk with one for a bit and I left it on a bench on the footbridge over the lake. 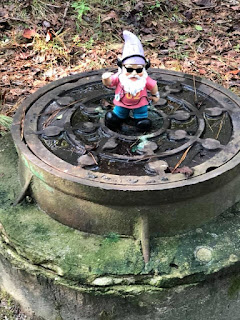 I hit 50 miles total and took another short break before the sky started to lighten up. More and more people returned to the race as the clock wound down and I went back to walking. I brought my phone with me to take some pictures of the sunrise and the signs on the course. My legs were starting to get a bit tired, but as it neared 8am, I kept a decent walking pace.

I crossed the timing mat around 7:30 or so and grabbed my banana for the banana lap. Volunteers write your number on a banana and a horn blares right at 8am. You drop your banana on the side of the trail and they measure out your last lap to add to your total mileage. I ended up crossing the timing mat one more time and kept going for about a minute past our campsite.

Jen had been pushing for a top 10 female placement in the final couple of hours and I loved watching her get all competitive. Spoiler alert: she did it! We were all pretty exhausted from our individual efforts and decided to sit around enjoying breakfast beers before breaking down our camps.

I definitely was FAR more awake than in years past going home and while I had 58 miles on my body, I was actually not very sore all things considering. My feet and ankles were a little puffy and I had a funky rash/skin irritation from the sand and grit in my shoes. However, I had no blisters and my chafing was pretty minimal. Woot!

I was worried I might have overdid it on the walking in retrospect and made sure to stick to my post-race plans of complete rest for a couple of days. By Wednesday, all the tightness had subsided and I breathed a sigh of relief that everything felt really, really good! After a week of very short runs, I will be ready to return to go into the last 4 weeks of marathon training on Monday. I have no idea what my fitness will look like on November 4th, but I'm excited to toe the line healthy!