During #soberJanuary, I went to Jekyll Brewing with a group of friends I'd met through the SFTC (South Forsyth Tri Club) and despite being sober and unsure of my impending injury, I ended up halfway agreeing to do the run portion of the August 70.3 Ironman relay.

Booted in February and March, I was reluctant to commit right away. April and May slipped by unnoticed and by the time I was approached about it again, I was back in the stupid boot. June and July passed with misery and when I started running again, 13.1 miles seemed like it was going to be really, really hard. But since I mumbled something to the effect of that sounds like a fun idea back in January, I sent Rudy the money for the team and hoped for the best.

7 weeks after being cleared to run, I found myself sitting on my front porch waiting for Casey to pick me up at 6:00 a.m. to head to Augusta. Going with a bunch of people who have competed in many, many triathlons was advantageous. They eagerly answered my thousands of questions and I soaked in all the knowledge they dispensed.

I had met Beth at the January event and she was our swimmer, the first event in the race. Every assured me that Doug was incredibly strong on the bike and they were excited that our team had a chance to put up a solid time in the relay category. Truth be told, this put some pressure on me to perform well as despite everyone reminding me it was for fun, I didn't want to let my teammates down.

Doug and I finally met at registration where we picked up our bibs, ankle timer, t-shirts, bags, etc., etc. 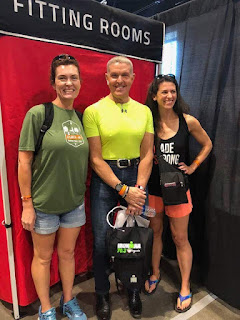 Lyndsay coordinated dinner at Savannah River Brewing company where we dined on Moe's and carbo-loaded with a few beers. It was a good way to forget about race nerves for awhile and complain about the impending warm day ahead for all of us toeing the line. 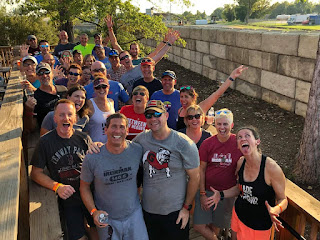 I laid out my flat girl at the hotel and got excited about racing in the morning!

Casey and I managed to get to sleep at a reasonable hour and I felt mostly rested when the alarm went off at 5:30. I rode with the group to transition and passed Miranda Carfrae amongst the sea of bikes! I am a big fan of triathlon despite having never raced one myself so I was fangirling pretty hard.

Back at the swim start, I watched the SFTC members slowly make their way towards the dock to start their races. They had a self-seeded start which made it look like a huge group of lemmings just following the crowd into the water.

Once I saw the final club members off, I walked back to the car and tried to cool off and rest a bit before getting my day started. I wanted to take a nap, but I was too excited to race so I just enjoyed putting my legs up and eat my overnight oats (with a banana peel because I forgot a spoon).

Following the tracker, I saw that the first pro male, Tim O'Donnell, was about to be running by so I hopped out of the car and managed to catch him coming through on his first lap. I watched for a few more minutes and then proceeded to get ready to race. I put on pounds of sunblock and Vaseline, changed into my Vaporflys, and told Sam & Kathleen I was going to do a warm-up run to the start.

The goal was to run 15 miles total with 12 at marathon pace in preparation for NYC. I have no idea what marathon pace is right now and coupled with the 90°+ and noon start, I was just ready to hold on for what felt like hard tempo. But, I knew that I would feel better prepared in NYC if I was doing these longer runs as prescribed, so I slowly jogged to the start line.

Having just met Doug the day before, I realized it might be tough to spot him when he came in. So I tried to keep an eye on the relay tent despite all the action happening around me at the bike transition. It was all so interesting - watching some people sprint from their bikes into the run and others taking their time to compose themselves before jogging to the next portion of the race.

Sam and Kathleen made it to the relay tent and they helped fill the time before Doug arrived. Unfortunately, Sam (who had promised to help me keep an eye out for him, oops!) had walked away and I was watching the run start when he came in. I sprung to action and we wasted no time throwing the ankle timer on me. And just like that, I was off!

I told myself to take it easy in the first mile, but I sprang into the race with fresh legs and competitive juices flowing after missing out for 5 months. 99% of the people I was sharing the course with had just swam 1.2 miles and biked 56 miles. I wove in and out of people as I made my way out of the bike transition area and onto the asphalt of the course.

It didn't hit me right away how warm it was. I hit the first mile marker in 7:31 and chastised myself for going out too fast. Oops. In the second mile, I noticed the heat creeping like a dark cloud coming over me. I had bypassed the first aid station so I didn't have to slow down, but now began to look for the next one. I saw someone wearing a SFTC kit and cheered Doug on when I came shoulder to shoulder with him. 7:23

I found sweet relief by pouring a bit of water in both my mouth and over my head. Cups of ice were being handed out and I dumped the entire cup into my sports bra. Then, a cold, damp sponge was handed to me and I stuffed it in the back of my sports bra. As the course rounded the corner to begin the descent down Broad, I was happy to find another aid station and throngs of spectators lining the streets. The crowd pumped me up and I heard Lyndsay and Paige screaming my name as I went through the intersection of Broad & 8th. 7:35

There was a woman standing with a hose along the street spraying runners as they passed by and I made a beeline to get as close as possible for maximum impact. I immediately felt my body temperature drop and bit and chomped up the pavement as I headed to the curve at Sibley. 7:19 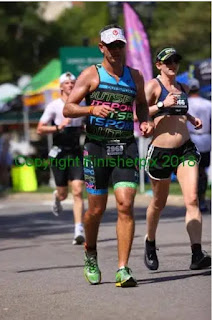 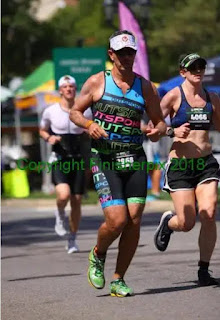 At the aid station at Sibley, I grabbed a cup of ice and actually felt reasonably comfortable for a short while. I was hydrated, running well, and in the patches of shade along Broad, things seemed to being well. 7:40 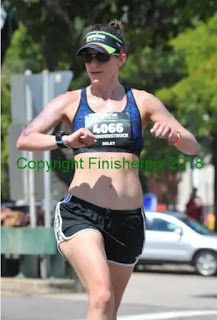 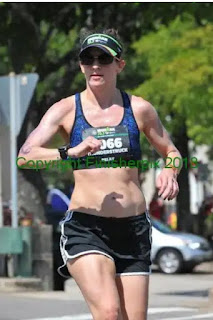 I saw the SFTC group again, the finish line, and then made the turn at 11th to follow the course almost back to the beginning. 7:48

Just past the mile 6 marker, the course split for those making their second lap and those on their way to the finish. Though loop courses can be boring, I now knew exactly what I would be facing once I made my second lap. The stretch back to the start was very exposed and very boring. But I actually felt the best at this point. I had filled my sports bra with ice and grabbed an ice pop from a kid which was actually serving it's best purpose by keeping my hand cold. 7:35

But soon the endorphins started to fade and I started to tell myself I needed to just hold on for the last half. The second lap had even more people and despite my fade, I still was passing a ton of people who had already covered 60+ miles with their bodies that day. I told myself to suck it up as I was only doing the run. 7:58 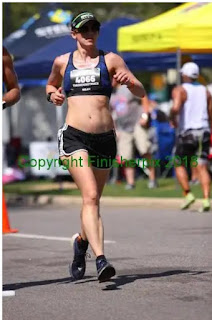 Once I got to 9, I could visualize running the last section of the Greenway and knew just how much I needed to save in my tank to finish strong. 7:29

My feet started to hurt and I was holding ice in my hands at this point to try to keep everything cool. I was aware that I should have taken a gel at some point, but I also knew that I wasn't fading because of calories. 7:55

It was a slog to get to Sibley and the exposed sections seemed warmer and longer than before. I hated wasting time with just a few miles left in the race, but I also didn't want to have to walk the last mile. 8:01

The final foray down Broad gave me a bit more energy as I visualized getting back to the group at 8th & Broad and then making those final turns to finish. 7:44

At the mile 12 marker, I desperately wanted to turn on the gas and go, but I hardly had anything left in the tank. I stopped looking at my watch and just tried to gauge how much I could push once I got to the final turn. 7:44

Beth was standing on the corner near the finish chute and we cheered as I pumped my arms down the red carpet. Last 0.1 at 7:17. 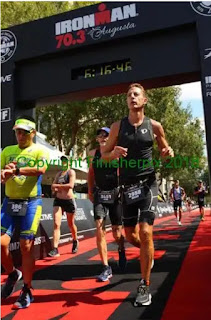 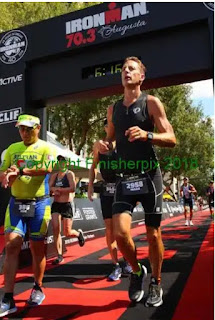 Volunteers were asking if everyone was okay as they stumble past the finish line. I was tired and hot, but not in need medical care. In fact, as soon as I grabbed the medals and finishers' hats for me and my teammates, I remembered that I still had a cool down run to do!

Old Carissa would have just said that 14+ was enough, but I am determined to do this training cycle right! So I found my teammates, gave them their bling, and got a photo before heading out for a 15 minute cool down. 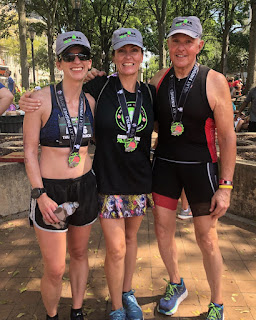 After my cool down, I headed back to the finishers' area to grab some food and a celebratory beer. Then, I hung out with the SFTC and cheered the other racers as they wrapped up their days. We ended up coming in 5th out of 74 relay teams and my final run time was 1:40:36!

Things I did well: managed the heat with ice and water, kept expectations reasonable given the conditions, did a warm-up and cool down, ate reasonably (see the don'ts for the don'ts) well the day before the race and race morning, had a great time with a relatively new crew of people

But I'm satisfied with the result. I've run a faster half marathon split in a full marathon so obviously I'm not super excited about my time. But given the conditions and the fact that I was cleared to run 7 weeks ago, I am satisfied.

Next up: Hinson Lake 24 Hour on Saturday! Goal is to run 20-31 miles over the course of 24 hours and eat the pizza while it is hot for once. It will strange to not be competitive, but good for me to watch and cheer on other people looking to reach their big goals.