The first day after I ran 115 miles at Hinson Lake, I slothed like I had never before. My body ached from head to toe and though the brain fog seemed less intense than the prior year, it was still there. I lazed around the house, soaked my feet in an Epsom salt bath, snacked, and rested. I didn't actually feel any hungrier than normal - it is strange how sometimes I feel ravenous after a race and other times, it seems to have no effect.

Needless to say, running was out of the question for a few days. I was determined to be a little smarter about recovery this time around. The itch would come soon enough. Last year, I ended up with a couple of weeks of Achilles pain following Hinson Lake probably due large in part to too much, too fast, too soon.

It was a beautiful fall day the Wednesday following the race and all the soreness had finally dissipated. I decided to take an easy loop on the trail near the my house. Veeeerrrry easy. It. Was. Incredible. I don't know that I have ever had a run that was so good. I knew I should only do 2 of the 1 mile loops, but I couldn't help myself. I ran 3 loops. If I could bottle that magic and sell it....

But running isn't always magical. And in the runs following that one, they have been somewhere in the 3-6 range on a 1-10 scale. Some better than others and I attribute that mostly to the fact that the weather has been far less hot and humid than 6 weeks ago. But my legs have had no get up and go and an 8:00 minute mile feels like a 7:00 minute mile. I know I should be patient in the recovery process. But I am so anxious to run fast after nearly 5 months of longer and slower.

Knowing that I have been sliding more and more into being competitive in races, I needed a fun race. Last year, I ran the Greenville Marathon dressed as a donut large in part to remind myself to keep it fun. So after my friend Matt graciously helped me secure a race entry, I decided to keep it fun again this year.

Adam told me he ordered a costume online that I could wear to the race. However, by Thursday night, it still had not arrived so I told him to grab me a Wonder Woman costume at Target. They were sold out of course so I went with my backup. 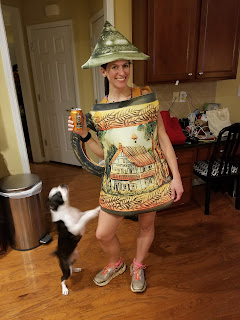 I've been hating all my running shoes lately and ordered a pair from Amazon to arrive Friday. Except I got a notification they were damaged en route to me and were to be reshipped. So...I would be running in my trusty Clifton 1s that are now a half size too small. My feet have grown at least a size and a half in the past 10 years!

I ran 1.2 miles on the treadmill Friday night in the costume to make sure I would be reasonably comfortable. The handle was my biggest concern, but my arm swing is weird and short on my right side anyway so it kind of worked out perfectly.

I slept like a brick per usual on Friday night and awoke to my Garmin alarm at 4:15 a.m. I put on my race clothes, made a cup of coffee, warmed up some frozen pancakes in the microwave, and was on the road by 4:45 a.m. 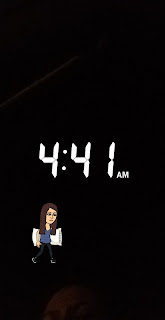 Traffic was nothing and I arrived to Furman University by 6:30 a.m. Matt and I eventually found each other in the correct parking lot and I jumbled around trying to get my act together. Lots of Vaseline all over my arms and shoulders as well as the usual hot spots. There was a possibility of rain in the forecast and I was determined to not have to toss my costume onto someone's lawn due to chafe. 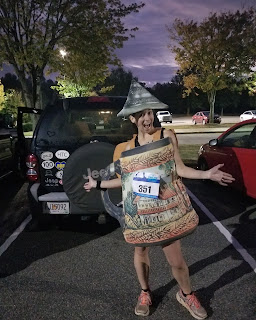 I talked with a few people as I made my way over to the start because wearing a beer stein is a pretty good conversation starter. I was probably the most calm I have ever been at a starting line because I really had zero expectations of anything for the day other than to make it to the finish line.

The gun went off and as we began, a safety pin popped open on the right side. Aw, shit. So I struggle to try to run and close a safety pin within the confines of the costume. It took at least 90 seconds before I got the stupid thing shut. I could have stopped to fix it, but I was trying to not be that jerk that stops right in the beginning of the race. I was already being a jerk taking up extra room in my costume.

Once I was secured, I spent the next mile catching up to the 4 hour pace group. It was the group I ran with last year and it felt like a reasonable place to be given my current fitness. Once I caught them, I tried to stay towards the back of the pack at first knowing that my personal space area was a bit, um, amplified. As we began to tick off the miles though, I slowly fell in place behind the pacer and eventually talked to her for awhile.

The early miles were around Furman and a mix of sidewalk and road. A few college kids were out ringing cowbells and cheering, but it was fairly quiet overall. Once we started running off campus, it got even more quiet. This part of the course was different from last year and I didn't care for it at all. It was through a residential area dotted with huge homes on acres and acres of land. The road wasn't coned off and though I was running with a group, I couldn't help but think about the safety of those who weren't. It wasn't clear what side of the street we were supposed to be on and the road was completely open to traffic. 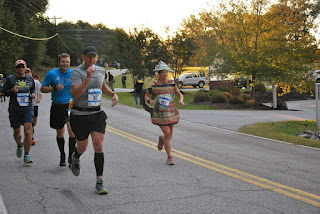 I was feeling reasonably good and nothing was really bothering me which is always a happy thing while running a marathon. I remembered to start taking my Huma gels every 5 miles and a light, misting rain helped to keep things nice and cool. I actually got a little chilly for a bit and was kind of glad that I was wearing a non-breathable polyester costume.

The course had a bunch of rolling hills and I was pretty glad that I wasn't going for a PR. Nothing that was crazy, but a far cry from flat. As we neared Furman again, I was looking forward to getting on the much more scenic and tranquil Swamp Rabbit Trail.

The pacers switched off at the 13.1 mile mark and the girl pacing, Shannon, was the same one from the pace group last year. It was fun to talk a bit and then I ended up talking to Brooks for about a mile while we led ahead of the 4 hour group. He decided to slow down and remain with Shannon, but I was now kind of set on that slightly faster pace. So I just stayed ahead of the group and decided to do my own thing around mile 17.

There were a fair number of cyclists out on the Swamp Rabbit Trail and it was fun to get smiles as they came swooshing by. I was feeling happy and good at this point - a strange feeling in the last 8 miles of a marathon, but I guess I just needed an 18 mile warm up? The water stations towards the end were full of cheering people and it was energizing to run through the crowd.

It is hard to sneak by another runner in a beer stein costume so I tried to at the very least say good job as I went past. I ended up talking to about every other person in those final miles, asking them how many marathons they'd done, what their goals were, or how they were feeling.

As I headed into the last 10K, I knew I wasn't moving super fast by my own standards, but I felt pretty good all things considering. It was a perfect fall day and a wonderful long run. There were going to be snacks, beer, and football to nap to later. Life was good.

I passed a guy on a unicycle who said that is awesome and I said no, you're awesome! I actually laughed out loud when that happened because it just seemed so random that a person riding a unicycle and a person running a marathon in a beer stein costume would pass each other on a Saturday morning.

The last mile had a short, but steep hill and I powered up that beast ready to take on the mile 26. Except my shoelace started to come untied as I went flying down the other side and I actually had to stop and tie my shoe with less than a mile to go. Ha!

I forgot about all the uphill in the final mile and kept looking around for the entrance to the baseball field. Finally, a volunteer pointed me left and I followed a couple of runners onto the warning track on the first base line. There was a lady ahead of me who I recognized from earlier in the race and though I had a sprint finish in me, I decided to just stay about 15 feet behind her in case they were doing finish photos. Talk about worst photo bomb ever....

Crossing the line, I felt satisfied. It was still a marathon and it was still tough at times. But I felt a sense of relief that I could rise to the challenge after feeling so mopey for weeks. Having fun and running just for the sake of running was exactly what I needed. 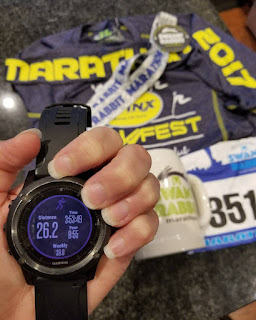 Splits if you are into that kind of thing: