I ran my fifth Rock the Parkway half marathon on 8/28/21 - the first time the race took place in August! I placed 3rd overall female for the third time; I can't seem to move up in my placing at this race (I've also been 4th), but I'm not fading at age 40, so I'll consider that a win.  I didn't have a time goal since it was over 80 degrees at the start and nearly 90 by the finish.  However, based on my Hospital Hill performance I figured if I could run 1:25ish it would be a good day, so I was satisfied with my 1:24:19 finish time, though I missed the Missouri state record for age 40 by 34 seconds. This was also my first time running a half marathon during a 90 mile week, but I really don't think that hurt me and blame any and all difficulty on the heat and humidity.  Racing is always a blessing, and I enjoyed myself greatly, but I also didn't feel super stoked about this one before or after, which I of course blame on summer!

My dad's video of the start is here (enjoy the race officials yelling that only waves AA and A were supposed to be in the chute or starting, and a lot of people ignoring it, hah!).

My dad's video of the finish is here.

My Strava activity with splits and elevation is here.

Rock the Parkway is one of the races I return to year after year.  2021 was my fifth time running it.  The April 2020 event was postponed to August 2020 and then cancelled.  When race organizers cancelled they noted they were rescheduling for August 2021 with the hopes that COVID would allow them to hold a normal event by then.  After my heat debacle at the USATF Masters National meet in July, I wasn't particularly excited to run an August half, but I really love this race and knew I would have fun no matter what!

This race was 5 weeks out from my first fall marathon, and there was no reason to "waste" a taper on an 80+ degree half, so I trained right through it, including a workout with almost 7 miles of sub-6:00 running on Tuesday, 13 miles on Thursday, and 90 miles total during race week.  I've run solid halves during 80-some mile weeks before so this part didn't worry me.  I tend to feel worse if I taper too much!

I never expected the weather would be good, but when weather.com told me it was 79 degrees when I woke up on race morning, I knew things were going to be even worse than I'd expected by the 7:00 a.m. start.  My goal was to place as high as I could, and while I'd thought that I could probably just barely break the age 40 state record of 1:23:45 at 70-75 degrees, I knew it would be a stretch at 80-90 degrees.  I race by effort anyway, and this course is hilly in a way that you really need to run by effort instead of splits, so I figured I'd just start off about marathon effort and see what I got!

I warmed up for a little over 2 miles with my running buddies Casey, Christian, and Andrew, we all complained about the weather, and we lined up in the elite wave.  I greeted my fast friend Chandler in the corral, saw another fast Kansas City area runner Connie, and had a brief conversation about the course elevation profile with a runner I didn't know, Kristen (names were on our bibs).  I was open about my plan to go out very easy, since the heat sneaks up on me if I don't, and I also told the others that miles 2 and 3 of the course have a lot of elevation gain so it's best to keep things really in check for the first 3 miles.

After the start, Connie was quickly out front for the women, followed by Kristen.  Chandler, Casey, Christian, and I were all together, with Andrew and several other men around as well.  Chandler and I ran most of the 2019 Grandma's Marathon together, and she told me that she was going to stick with me in this race since she thought I was the best pacer (aww).  I shared my course strategy mile by mile with her, and after getting up the climbs in miles 2-3, we notched down the effort and started trying to chase down Kristen.  At that point we lost the others who'd been running with us.

Running with Chandler was great.  We chatted a bit, I gave her a heads up on course hills and upcoming turns, and we encouraged each other that we could overtake the woman ahead of us.  We gained on her, but I could see she was also passing men who'd gone out fast so I didn't think she was dying.  I kept my eyes on her, and before a hill around mile 8, I told Chandler we should ease up the hill then really chase her down.  At this time we were 3rd and 4th females behind Connie and Kristen.

I've learned that in the heat, instead of a slow burn to fatigue, it often hits me all at once.  Instead of going from feeling good to feeling okay to feeling a little tired to feeling pretty beat, I go from feeling good to feeling pretty beat all at once!  This happened around mile 9.5 of this race.  I began struggling to stay with Chandler, and hung on for maybe a quarter mile but then she gapped me.  Shortly after,  I saw Connie standing on the side of the road, having dropped out due to overheating.  She'd gone out pretty fast for the conditions, and of course I'd hoped I could catch back up to her, but not like that!  At that point I was 3rd female, with Chandler looking strong.  I hoped that Chandler could catch the first woman, and better yet, that both Chandler and I could catch her.  She still had a significant lead on us, but heat is an X factor for everyone.  I felt myself fading but reminded myself that the heat could hit the others hard at any time so I should keep pressing.  Sometimes I wish I could try a run in someone else's body and see if it feels different!

I'm pretty good at negative splitting long races in cool weather, but it's much more difficult for me to do in the heat.  I had a far weaker final 5k than I typically do in this race, but I fought with all I had and didn't let myself settle for 3rd until I saw Chandler crossing the finish line.  The final mile of the race is downhill, though you've earned it after climbing the same hill in mile 2, and normally it's a relatively smooth mile, but this year it felt like the longest mile ever!  I just kept thinking, "when am I going to see the finish line?!"  I'd looked at my watch at mile 11 to see if I had a chance at the state record to try to motivate my tired body and my mind that was telling me 3rd was just fine, and by my very loose calculations I thought I could get it if I ran the final 2 miles at about 6:00 pace.  I have done that on this course in 45 degree weather, but it wasn't to be on this day.  I know I can break the record significantly in decent conditions, but I don't have another half in Missouri planned before I turn 41 so it would have been nice to sneak by in this one!

The announcer announced "another top female finisher coming in" as I crossed the line in 1:24:19.  After bending over for a moment and congratulating Chandler and Kristen, I turned around to watch for my friends coming in.  Andrew came through in 1:25:58 (I think he is in better shape than me but the heat bothers him more), and Casey in 1:28.  We snapped some pictures and I knew I'd better get moving pretty quickly or my 6.5 more miles for the day weren't going to happen!  Christian came through in 1:34 then I jogged to my car to change my shoes, drink multiple bottles, and grab a gel and chews.  I'd planned to take a gel in the race since I had a 22 mile day, but the thought of stomaching one was not appealing!  Generally I don't take a gel in a half, but I've learned that when I'm tacking on a lot of miles after the race I need to take one to stay on top of my fueling, and I later paid for not taking it.

Andrew ran the 6.5 additional miles with me, which was much appreciated!  We ran back on the course since the road was closed to traffic, and I ended up picking up water from two aid stations along the way, and when I started bonking I stopped and drank 3 cups of Gatorade, which saved the rest of the miles.  The extra miles were quite easy paced, but we successfully finished them off, another step towards our next 26.2s! 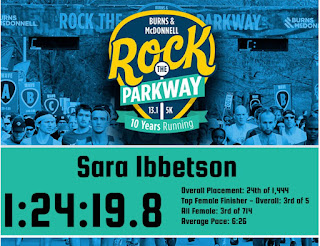 All in all, I'm content with this race.  I'm not super pumped or proud of it, but I'm also not disappointed.  I don't really think I could have done anything differently to improve my performance.  It's always a competitive event, and I'd love to move up to 1st or 2nd some day, but this wasn't my year for that.  The two women who beat me both competed in the 2020 Olympic Marathon Trials and are currently training for fall marathons, so I had my work cut out for me.  I also think it was a take-what-you're-in-shape-for-and-add 5:00 kind of day for most!  Strava said this course had 525 ft of elevation gain, while it said Hospital Hill had 590 ft, but it was nearly 10 degrees warmer for this race so I think that means I ran better than at Hospital Hill - and I definitely ran better than at Masters Nationals with a non-flat middle 10k of about 38:30 in this race.  I also think I'll get some nice training gains from the race and from gutting through the miles afterwards.  And as always, any day we can run is certainly a God-given gift!