I ran in what I hope will be my first of many USATF Masters* Championship races!  I also hope it is the worst race performance I produce in a competition like this; though I was able to hang on for a 2nd place finish in age group 40-44 and 5th overall female in the race, my time was a huge underperformance in relation to my fitness.  I'm sure no one is surprised that it was hot and humid in Iowa on July 24.  I went to compete without expecting a fast time, but I didn't expect to suffer as much as I did, finishing in 39:39.  I think the heat slowed me down about 2:00, but my performance being equivalent to 37:39 in good weather doesn't really make me feel any better, especially because I couldn't dig to compete like I typically can.  I really enjoyed training for this race - the day-to-day training was awesome! - so I'm still glad I did it, but it's going to take some time for my ego to recover from it.
*I also learned that although masters division typically begins at age 40, USATF starts it at age 35, so I have missed 5 years of masters championship road racing.
The Long:
As part of enjoying being a new masters runner, earlier this year I looked at the USATF masters championship race schedule.  As part of being crazy, I love racing 10,000 m on the track and thought doing it at the end of July in Iowa seemed like a great idea!
I didn't have a time goal going into this race, because I knew that weather and strategy could be big factors.  However, my speed block leading up to the race went well - the best speed block I've ever had actually - and I felt fit and tapered leading into the race.  The race day forecast was warmer every time I checked it, and by the time the race began at 8:45 a.m. the heat index was 90* with the sun radiating off the track.  I told myself that I die less than most in the heat, shoved ice into the crop and shorts of my new rabbitELITE race kit, and went to the starting line hunting a national masters win.
My heat of the 10,000 m had 4 women's age groups and 2 men's age groups in it, so there was a crowd!  My plan was to run the first 2 miles conservatively to try to avoid overheating, then progress the pace downward from there.  While I didn't have specific time goals, I thought I was in shape for a 35:59 in ideal weather on a good day with good pacing, so I figured high-36/low-37 in the conditions we had.  I have been heat-adjusting my workout goal paces when it's been over 70* and humid, but by only 50-75% of the amount this heat calculator recommends.  I came through each of the first 8 laps right around 1:30 (I ran by feel but it's very difficult not to look at the clock when it's a huge display in front of your face each lap), and it didn't feel fast but it also didn't feel good.  I told myself I'd feel stronger as the race went on, and to reel in the women ahead of me.  At that point I was leading my age group, with two women ahead of me in the 35-39 division.
Around 2 miles I started feeling worse, and a man who'd been running right behind me passed me.  I told myself to latch onto him, which I did briefly, but I couldn't maintain contact.  By the 5k I really started worrying, but I reminded myself that in most 10ks I've run I've passed the 5k thinking there was no way I could run that again, but I always did, often faster.  At some point another woman passed me, and I tried to stay with her even harder than I'd tried to stay with the man, but much like earlier, I just couldn't.  Our age groups were on our backs, so I knew she was in 45-49 and I was still leading age 40-44.  I knew I was slowing despite my best efforts not to, and at that point my goal became hanging on to win my age division.
I still kept telling myself I was going to feel better and speed up, and that everyone else was dying just as much.  I was trying to take 1600 m splits on my watch to look at later, but I missed one of them and then started really struggling to remember what lap I was on.  My brain felt foggy, my legs wouldn't move, and I just felt gassed.  At some point a woman with AG 40-44 on her back passed me and I really tried to hang onto her but my body felt felt shut down and I couldn't respond.  The possibility of a national championship slipped away and my goal mostly changed to just making it through, which is not a very inspiring race goal.
I was lapping people, some multiple times, plus two women and two men lapped me.  With the number of people in the race, the officials had their work cut out for them with telling people what lap they were on, and several times they didn't tell me my lap count when I passed.  My pace was so off what I'd expected to run and my brain was extremely cloudy, so the best I could do at times was "somewhere between 8 and 10 left" and "either 4 or 5 laps left!"  It started to not really matter, as the race began feeling more like a survival thing than a competition.  Finishing was a relief, though also a huge disappointment.
My official lap splits were:  1:29, 1:31, 1:29, 1:29, 1:30, 1:30, 1:31, 1:30, 1:32, 1:35, 1:36, 1:32, 1:36, 1:39, 1:39, 1:36, 1:35, 1:36, 1:40, 1:40, 1:38, 1:40, 1:40, 1:40, 1:33 (i.e., don't pace like this!).  I thought that starting at 6:00 pace was conservative, but clearly it wasn't adequate for me that day.  At the end of my 50k, I felt like it was the distance that got to me (not the pace), but in this race it felt completely like the pace!  Oddly, 25 laps on the track didn't seem very far. 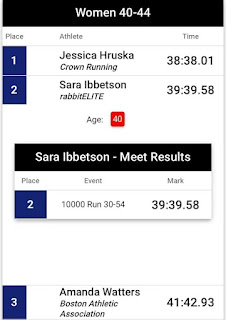 I am really not sure what happened.  Yes, 90 degrees and humid (dew point 72*) on a hot track is miserable, but surely that can't account for slowing down 37 seconds/mile from what my workouts indicated I could run; I am also generally really good at knowing what I'll realistically run in races.  Most of the field ran about 2:00 slower than their seed times, but I was 3:05 off of mine (my heat calculator also gives me about +20 seconds/mile in the conditions, which is 2:00 - but remember, for hot workouts I've been using only 50-75% of the calculation).  All of my track workouts and strength-based workouts this season were faster than when I ran 36:34 on the road, so even in the heat I thought I'd be in the 37s on the track; I also ran a 36:52 on the road in not ideal weather of 71*, dew point 68* when I was at similar fitness to what I am now (though now those conditions seem okay, haha!).  I couldn't respond in a competitive situation, plus I felt awful and not at all strong, which I think is what makes this particularly discouraging.  There was just nothing there.  Maybe it's just time to retire from summer racing! 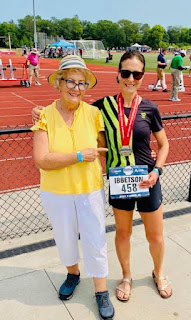 I'm trying not to dwell on this too much, because I am really thankful for the opportunity to compete in this event, and to take home the silver in my age group.  I'm thankful my parents came to the race with me, and for the vacationing we got to do along with it.  I'm thankful that my training for this race went so well, and that I'm 100% healthy.  But this was sure a hit to my confidence!  I also had to laugh about it; it was like my body said, "You think an 18:09 5k wasn't good enough, I'll show you a bad race!" Related note: my HR was higher during this 10k than it was during that 5k time trial, showing that I was right about that 5k effort being more like 10k-half effort.  This race was a 10k effort, it just wasn't the pace or place I thought that effort would produce!
But!  During my final tune up workout 4 days before the race, one of my running buddies was on a recovery when I was running a rep, and said "Go, coach!" (I coach several of my training buddies), which was the perfect reminder mid-400 that THAT was really what it's all about.  I love running and competing, but that is the selfish piece and surely not the primary reason God gave me a passion for running - though I believe He wants us to be happy, and running certainly makes me that way!  I love coaching, cheering for, supporting, and pacing others in this sport, and I really feel in my element when I'm doing those things.  I don't think I'll ever be anywhere near content with how this race went, but it doesn't change how much I love running and everything associated with it.
Now, onto a 5k, a half, a road 10k, and 26.2 between now and October 3! 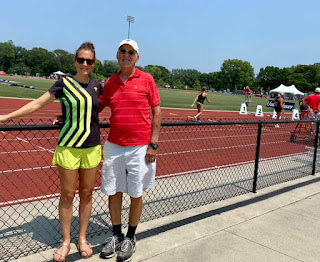 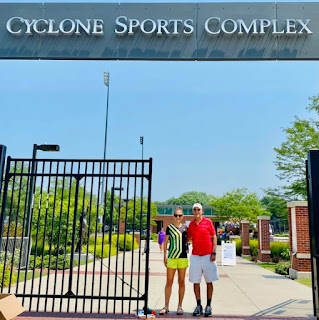