The idea to run a 20k time trial started because I was registered for the Dam to DSM 20k race.  I'd entered long before it rescheduled then turned virtual (before COVID and even before my hip issue!).  The virtual race window was August 31 through September 7 and I planned to run a hard 20k on September 5, but due to being overly cautious with a hamstring I tweaked lifting I ended up just running an easy 20k that day.  The hammy was back to 100% just a few days later, and for some reason I still wanted to run a 20k, so Christian and I both asked our coaches to schedule it on Friday, September 18.

I have no idea why I thought September 18 was a good day to run it; my wedding anniversary is September 17 and Albani's birthday is September 18, not to mention that Albani had a cross-country meet the evening of September 17, I teach an MSU class on Thursday evenings, and I have an 8:00 patient at work on Friday mornings.  Clearly this was not a well thought out plan, and I ended up being pretty unexcited about it.  But I also didn't have any legitimate reason not to run it, and I didn't want to let Christian down since we were planning to work together.  She hadn't felt very good on September 5 so was glad we'd rescheduled, and the weather ended up being much cooler on September 18 too.  I guess the only disadvantage of switching was that we had to start at 5 a.m. and run in the dark due to it being a work day!
Christian, Colin, Missy, and I were the brave souls who showed up to run.  We did a 2 mile warm up, a quick pee stop, and then decided precisely where we should start.  We planned to run two loops of a course we call "The 6 mile loop" that is actually 5.8 miles.  After we finished the second loop we would continue straight until we hit 20k (12.43 miles).  No roads in my area are flat, but this was the flattest course we could think of where we wouldn't have much traffic and that wasn't our workout loop (the workout loop is 0.82 so a 20k would be a lot of laps, although I have run 20 miles on that thing before).  The course we chose ended up having about 560 ft of elevation gain.
We started off with Colin immediately jumping out front as expected, Christian and I falling in side by side, and Missy tucking in behind us.  I figured I could do about 6:30 pace for a 20k on the course we were on, but I wanted to start off a little slower, so I looked at my watch during the first mile and to see the first mile split in 6:38.  I was aiming for 6:40, so was pretty much right on, and I didn't look at my watch again during the run.
It was nice working with Christian, although with much less talking than our easy runs together!  I felt average at the beginning, and the pace felt do-able but my motivation wasn't great.  But the miles clipped by as we chased Colin's blinking Noxgear vest in front of us, and by the time we finished the first almost 6 mile loop I felt fantastic.  Just needed to get those endorphins flowing I guess!  I also started thinking about past half marathon races - fond memories.
During mile 7 I inadvertently pulled away from Christian.  I was feeling good and staying pretty steady, and she slowed just slightly.  I yelled encouragement and continued on, although I didn't push myself nearly as hard for the final 5 miles as I would have if I'd been with someone.  I have always been someone who races (truly races, not pitch dark country road time trials!) much faster than I train, and it always blows my mind to see people run race pace for nearly race distance or to PR in training.  In fact, one reason I wanted to run this was because typically the pace I can do for 12-14 miles in training is about what I can race for a marathon, and I'm probably going to run a November marathon, so I thought I'd have a good gauge on where I was at from this run.
The second loop was just as uneventful as the first, and I felt strong through the finish but never fast, which is pretty much where my fitness is at right now - solid but not sharp.  I ran a little too far, stopping my watch at 1:20:56 at 12.47 miles.  My average pace was 6:29, which calculators tell me is a 1:20:35 20k.  This is technically an unofficial PR since I have only run one 20k race ever, although I have run much faster 20ks in half marathons and my marathon PR is 6:19 average pace.  But!  I'll take what I can get in 2020!  I wouldn't count a Garmin PR anyhow, but one reason we ran a 20k instead of a half marathon was so everyone could unofficially PR (maybe we will do a 25K next, hah!).  I was also pretty excited that I estimated my current capability so closely with my 6:30 pace estimate, although I really don't know what I based that on aside from one 6 mile tempo run at 6:26, hah.
You can see my Strava activity with splits and elevation here.
Colin averaged 6:14 pace and Christian 6:33; both were pleased with their results.  Missy stopped at 6 miles due to tummy troubles, but she is in incredible shape and ready to sub-3:00 this season.  After cooling down to 17 miles I rushed home and went to work!  I didn't have time to stretch or roll like I typically do after runs, but after a lunch break walk and yoga session I felt like a million bucks.

I'm glad that I did this, because it was fun and I really love long efforts.  I also finished with some gas still left in the tank and ready for more.  Now that I've been back to running for 3.5 months it's becoming harder not to compare to my previous times.  I'm not back there, but I'm determined to chase down 2019 Sara at some point! 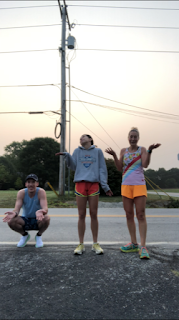 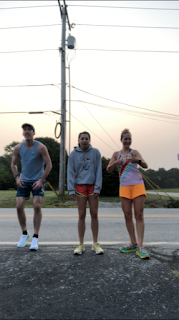 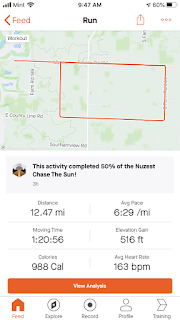